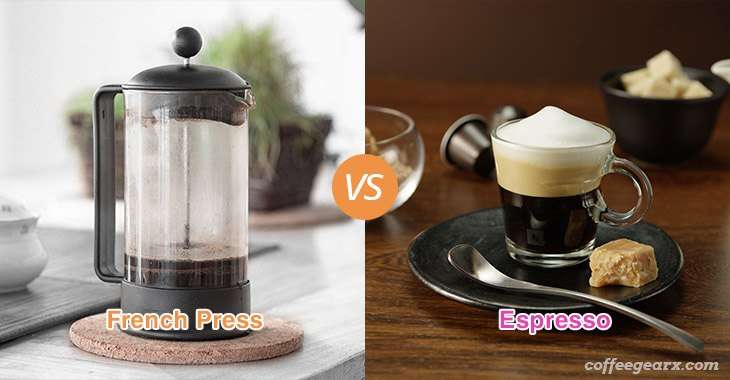 As a budding barista or just a regular coffee enthusiast that is tired of the mild and thin coffee that you get from drip coffee machines, you will in many instances end up torn between French press and espresso coffee makers.

Both French press and espresso makers are known for brewing strong, dark and powerfully rich brews which is just what many coffee drinkers need for their morning kick. This brew is also the base for other coffee variants such as lattes and cappuccinos.

Although both coffee makers make a strong brew, they are not the same and the coffee they produce will taste differently. And this is what makes it important to understand their differences.

Below is a detailed French press and espresso comparison to help you understand these popular coffee makers better.

Besides the obvious difference in the taste of French press and espresso coffee, the most notable difference between the two is the coffee preparation method. Also, the French press is a more involving manual coffee maker while espressos will come in different types from manual to super-automatic models.

How to Make French Press Coffee 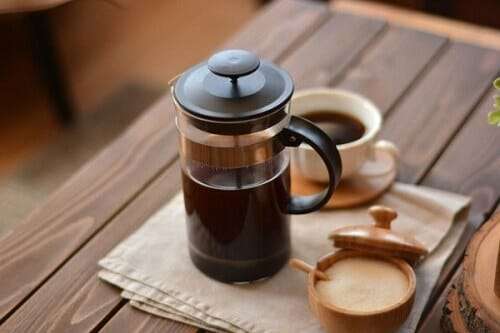 A French press coffee maker will consist of a beaker that comes in various sizes and is in most instances made from glass or stainless steel, a metal mesh filter and a plunger. Here are the simple steps to follow when making French press coffee.

Step 1: Heat enough water or according to the capacity of your French press to about 205°F

Step 2: Put coarse coffee grinds on the beaker and then pour in the hot water.

Step 3: Allow the coffee to bloom for a minute and then stir thoroughly.

Step 4: Give the mixture around 5 minutes to steep.

Step 5: Press down the plunger slowly and steadily to filter coffee

How to Make Espresso 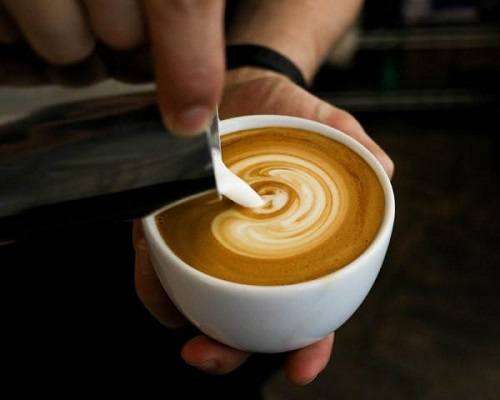 There are different ways of making espresso since there are various kinds of espresso makers out there. Key among them is the manual espresso maker that gives you maximum control of the brewing process and the super-automatic espresso machine that does most of the work for you.

But with a regular espresso machine which is typically the semi or fully automatic types, the following are the steps you need to follow.

Step 1: Grind with espresso finely and put them in the portafilter

Step 2: Tamp the grounds to make a coffee puck

Step 3: Heat up the espresso machine

Step 4: Add portafilter and place a warm cup on the dispenser

Step 5: Push the start button to pull a shot

A typical espresso machine will take between 20 and 30 seconds to pull a shot, and even if you add the time it takes to warm up the machine, grind beans and tamp them on the portafilter, it is still faster than a French press.

Given the strength of an espresso shot and the high caffeine content, most people will hardly take more than a couple of shots at a go. This should explain why most machines are only able to pull one or two 1-ounce shots at a time.

However, with espresso, the wait between shots is what you need to consider when looking at the capacity. Machines with zero wait between shots will allow you to pull shot after shot so that you can have as much espresso as you want and those with a large water reservoir will be even better.

For the French press, capacity is usually determined by the size of the beaker, and the most common ones will have 8, 16, 23 or 32-ounce capacities. But, one thing that gives them an edge over espresso is that you can easily make lots of coffee at a go.

One of the key similarities between French press and espresso coffee makers is that they do not use paper filters. And this means that most of the minerals and oil from the beans end up in your cup of coffee which enhances the boldness and taste.

However, the absence of the paper filter also means that besides the minerals and oils, more caffeine will also find its way to your cup given that the coffee is also not watered down a lot.

Many coffee drinkers think that because espressos are extracted at high temperatures and pressure, they are thicker and with a stronger taste, they have more caffeine. But, this is not necessarily true.

French press coffee makers are low maintenance devices when compared to espresso machines because they do not have any electronic components.

All you need to do to clean a French press is to take it apart into the three constituent parts, discard the grounds on the filter and run water through it to clean it.

If both the carafe and the plunger are dishwasher safe, they will be even easier to clean, but washing them in the sink with soap and water will also not take a lot of time or effort.

With a plethora of moving parts and a messier brewing process, espresso machines will take more effort to maintain and clean. Besides removing and emptying the drip tray, you also need to do extensive cleaning after every use with an espresso machine.

Portability is another feature where the French press outperforms the espresso machine by far. Given its smaller and more compact size and the fact it does not have delicate parts (unless the carafe is fragile glass), you can easily pack and carry your espresso machine anywhere.

Even the smallest domestic espresso machine can be quite heavy, and carrying it around will expose it to the risk of damaging the many electronic components and movable parts.

Also, since espresso machines require electricity to work, even if you can safely carry yours, you might still not be able to use it if there is nowhere to plug it in. But, for the seasoned baristas that know how to use manual espresso machines, they can be a little more portable.

Given the steeping process of French press coffee makers, the grounds get to sit in the water long enough for maximum extraction. Hence the resulting coffee will have a rich and strong taste.

The longer steep time ensures that the coffee has a bold and thick flavor. But if you leave it too long, over-extraction can occur and result in a bitter taste. Also, if you are looking for a cleaner brew, the French press is not it as you are always likely to end up with a few grinds in the cup.

Espressos, on the other hand, will have a smooth and bittersweet taste and with a nice crema at the top. The brew is also strong enough for making mochas, lattes, cappuccinos, and many other milk-based beverages.

Which is the Best?

Both the French press and espresso will deliver some of the boldest and strongest coffee you can get with any coffee making method. Hence, choosing between them boils down to your preferences or how you like your brew as a coffee fanatic.

However, the French press provides a cheaper method of getting strong and bold coffee. If you like something highly caffeinated and prefer a more involving coffee making it will also be your best pick.

Espressos, on the other hand, will bring out a particular sweetness in coffee that no other brewing method can and not to mention the amazing crema. Also, if you like milk-based coffee beverages like lattes and cappuccinos and want super fast brewing, espresso is the way to go. 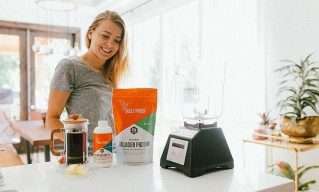 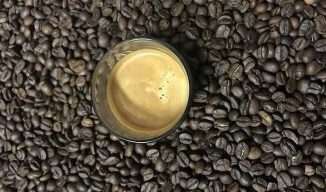 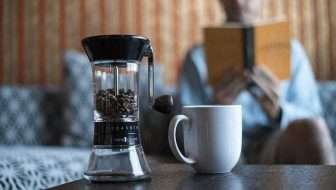 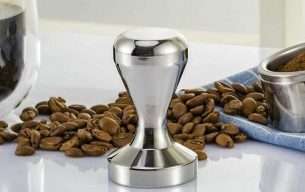 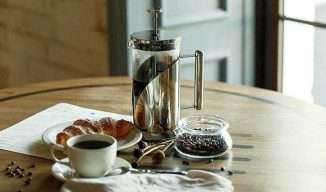 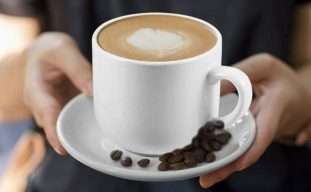 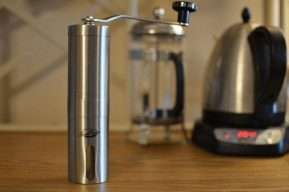 10 Best Coffee Grinders for Espresso in 2021